Disclaimer: Nothing contained in this article should be considered as investment or trading advice.

A dude obsessed with how many incredible changes blockchain can provide to our world, and wanted to make cool stuff to help raise awareness for it.

What came first art or crypto and when?

I bought bitcoin a long time ago and sold after Mt. Gox I was impressionable and my marketing manager scared me into selling way back when. Grrrrr.

You're big into comics...what were some of your favorite comics growing up and which comics would you recommend to those looking for quality stuff these days?

To be honest, I’m not terribly into comics. I just love the idea of adding a twisted sense of humor to “cute” cartoons. It makes for awesome humor. This kind of evolved into comics to be strategic and get my brand out there. I started as an animation channel on Youtube which would take three weeks to see and only Reddit to advertise to. They would slaughter the videos, and I realized I had to be smart about where it should go so I pivoted and attacked Twitter. It’s far more reasonable for a one man team to build a community through comics that are intense work but quick satire gratification. I may not be able to nail all the jokes but that’s due to having a lot on my plate. The pieces take like 4-7 hours, and I wish I could focus more on the humor.

Tell us a little bit about the KryptiCrooks project your most pumped about?

Absolutely no question is my mural. It’s all I really care about. I’m going to put so much detail on that bastard I’m hoping it will intrigue people that don’t care about crypto to educate themselves a little bit on what’s going on here. 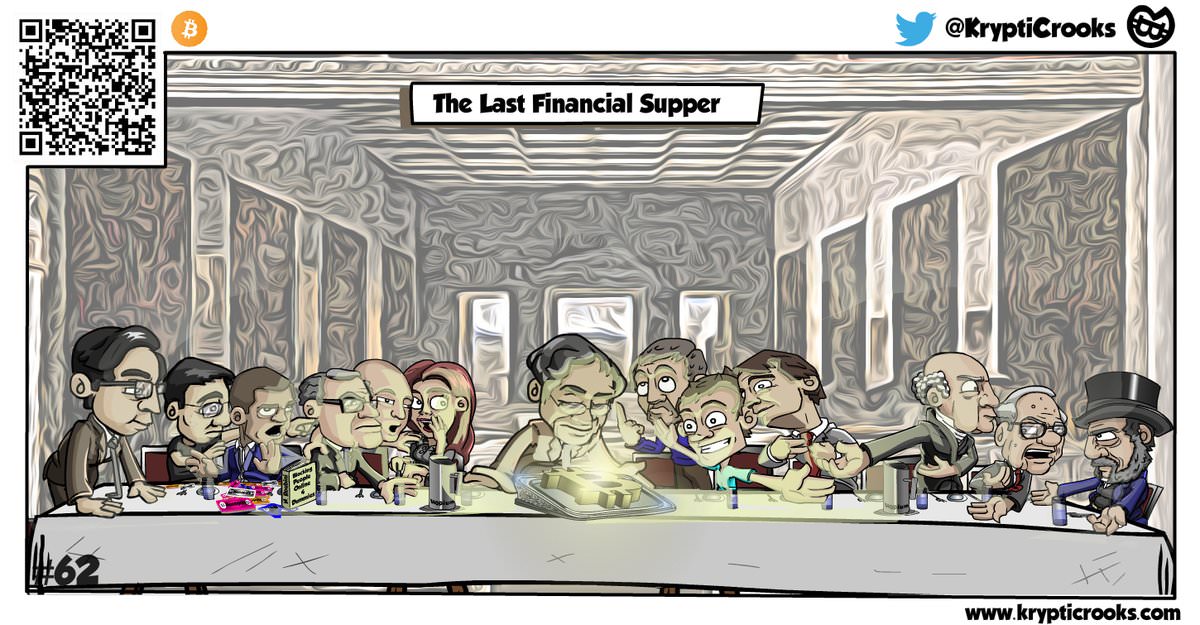 Your crypto mural is fairly famous in the crypto-twitter community...what inspired you to create it and how do you go about selecting who is in the mural?

Man... appreciate your choice of words on it. I started a shopify store in January of this year with intention of selling something crypto oriented. I thought to myself there’s got to be something special about what I’m doing so I kept looking at things, and came across a massive canvas. At that point, I had like 4 characters from my animations and threw them on there but never figured out how I was going to populate it, and if it was going to be my own characters. I then pivoted to Twitter, and started making these intense comics for other people. They were all vector artwork and it clicked I should revisit that concept. I had no idea what the hell the piece was going to be and let the market sentiment speak for itself. It’s since turned into quite a bit of twisted fun humor. There’s so much yet to be done on it I can’t even express. I’ve got some things up my sleeve to make releasing it a lot of fun I’m hoping.

Most of CryptoTwitter has seen some of your epic lip-syncing...can we expect to see more of these videos?

Haha. Yeah… Those things. I like to do videos but only if the concept is funny. I’m mostly obsessed at finishing this mural so that’s where my mind is.

Where do you see blockchain, crypto and the entire crytposphere as a whole in 3 to 5 years and do you see art and animation being impacted in any way?

It’s going to be massive. Even in this bear market the conversation about crypto hasn’t died down. More people know about it, the tech is advancing more then ever before, and it’s becoming more structured. The ICO boom and 2017 madness was explosive, not sure how the next catalyst to a bull market will treat the market but we’re at a critical mass of awareness. Can’t imagine the fomo that may come if there is a proper catalyst for the next bull run. 5 years from now… no idea. I do believe far more businesses will start accepting it when they realize they are basically doing cheaper faster business. Middle men don’t need to have their grubby hands on transactions or information anymore.

Where do you see KryptiCrooks in 3 to 5 years?

Haha. The whole idea is to be a full scale production with hopefully animation, and a team of writers. I want it to be a place to make people laugh and create cool shit. I’d love to have more time to spend on the writing/humor side. 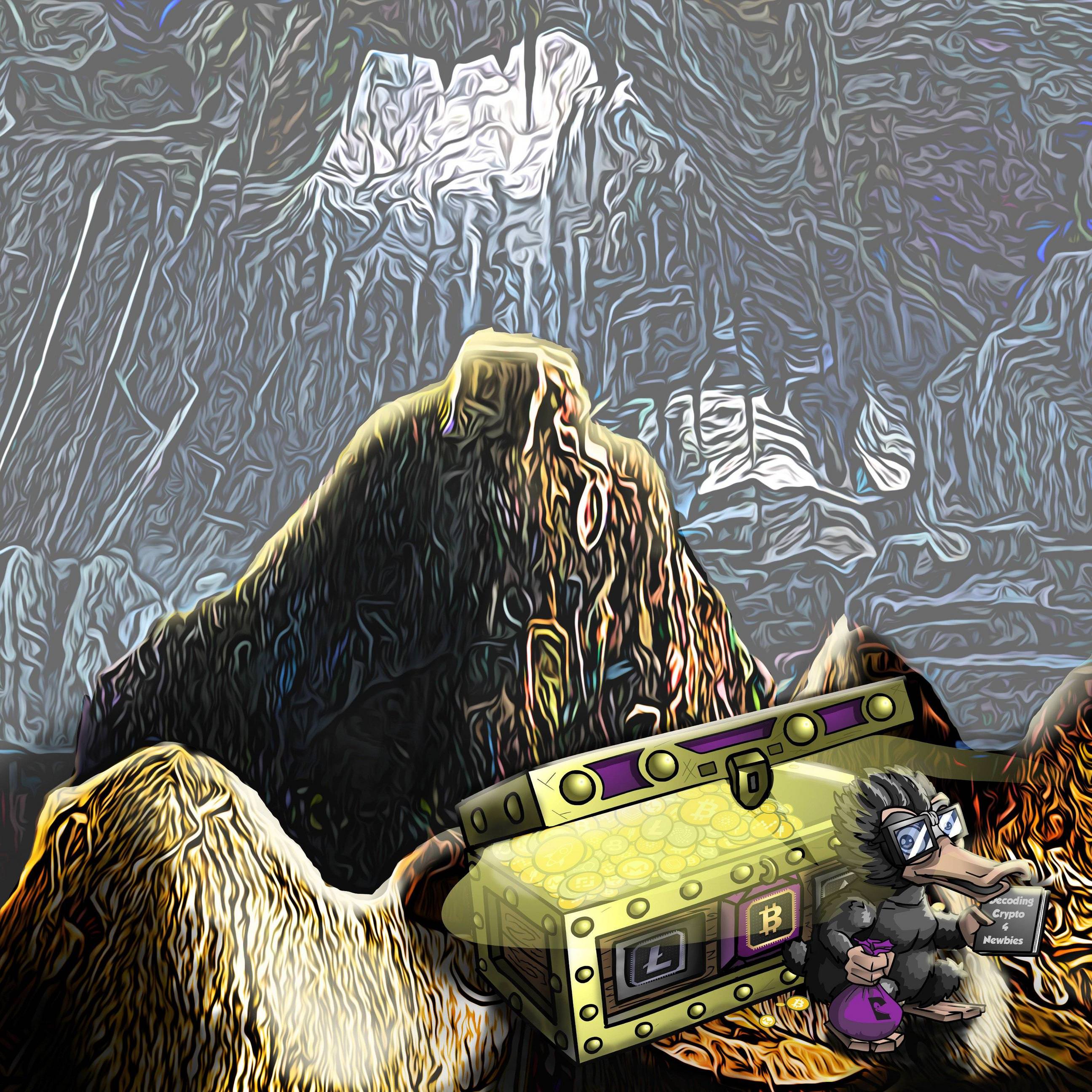 We always like to ask those we feature on Niffler.co whether they have any crypto projects they are particularly bullish on and why? ie Could be whats in your bag etc...

I’m a $GVT shill. There’s a few other things I like but not an expert on research, I’m so busy trying to do my thing at the moment.

Where should Niffler.co users who are interested in learning more about you and all of your ongoing or upcoming projects go for more info? ie site etc

Is there anything else you wanted to share with Niffler.co users?

Be prepared for the next bullrun boys and girls. Do your shit, research projects use this downtime to build something and be prepared. Virtual currencies are highly volatile. Your capital is at risk

You can now create additional portfolios to use for experiments (like a high risk portfolio) & competitions. Your default portfolio will always keep its original performance metrics.